In the morning, the Postauto to Fanas was packed with gliders. Lots of usual suspects, like Thomas Blatter, Stefan Hollenstein, Alfredo Studer, and so on. The cable car has an official capacity of 24 persons/hour, so in springtime making a reservation as soon as the forecast looks promising is wise. – Around 11 am deer showed up below the takeoff. Soon after, the thermals were ready, and I was ready for them. 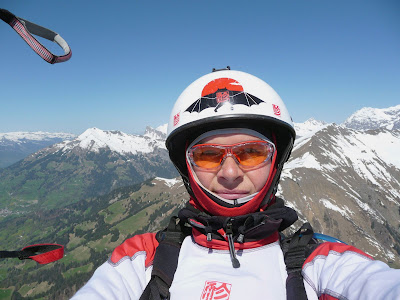 11:16 Sassauna. In the first thermal climbing up to the Sassauna I discovered another friend, Ronnie Geijsen. 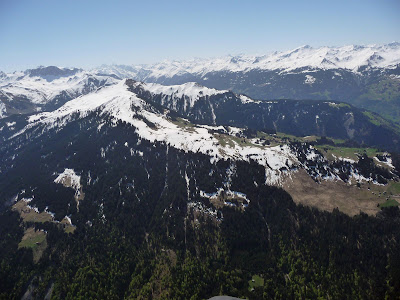 11:16 Stelser Berg and Kreuz. Ronnie, Dutch competition pilot and this year’s X-Alps participant, waved hello while climbing out from the Stelser Berg. When I passed the peak some minutes later, I watched several groundhogs hiding away on my approach. 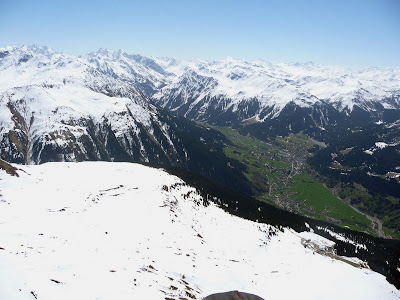 12:09 Above Madrisa. At the valley bottom you see Klosters, favorite skiing resort of the British Royal family. 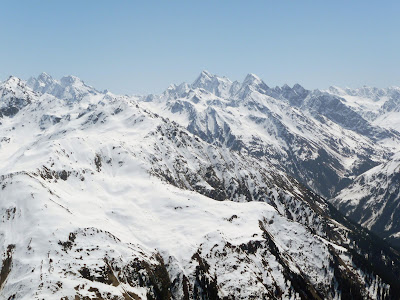 12:10 Direction Älpeltispitz. A good line above Madrisa, that allowed me flying straight most of the time, made me arrive first of the pilots at the eastmost turnpoint at the Fergenhütte. Crossing to Gotschna, a wrong decision cost me about 15 minutes. Urs Schönauer and Michael Sigel, friends from the Swiss League, caught up with me. 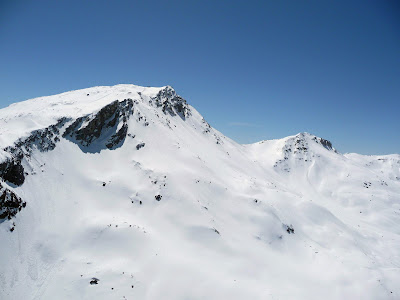 13:17 Leaving Gotschna. Not quite as high as I wished. But I’ve flown this before, and it worked out. 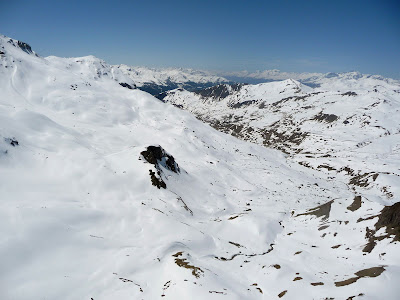 13:17 Crossing into the Schanfigg valley. Some minutes later I discovered Michi Sigel again, he flew a lot closer to the ground than me. 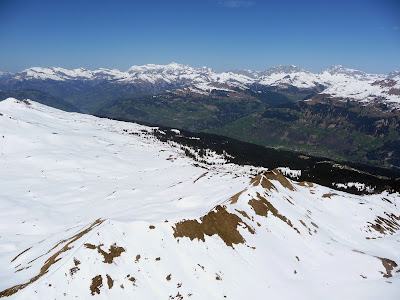 13:19 The Prättigau valley to my right side. Urs Schönauer left us here. He flew back to the Stelser Berg. After that, Michi Sigel was the only pilot I saw in the air for the rest of the day. 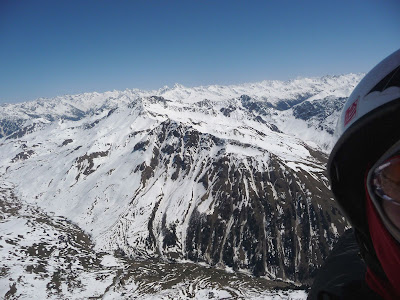 13:39 Looking back. Having made base again, I was wondering what the area, where I came from, looked like from that angle. 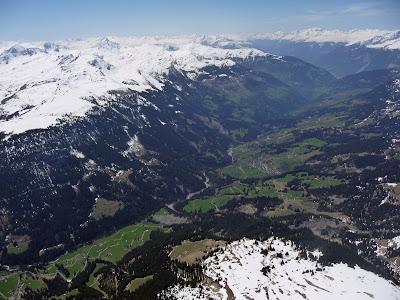 13:39 Schanfigg valley. – The valley was bumpy as usual. I do not really enjoy flying here, but it is a fast ride, only about 20 minutes out of the valley. Thermals were too sharp to turn in, so I just flew straight above the snow line towards the end of the valley. 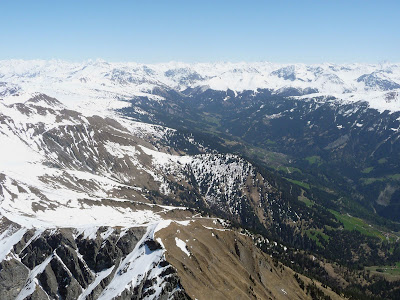 14:08 Schanfigg valley in the back. As expected, only 20 minutes later, and at maximum altitude before crossing the Rhine valley towards the Calanda. 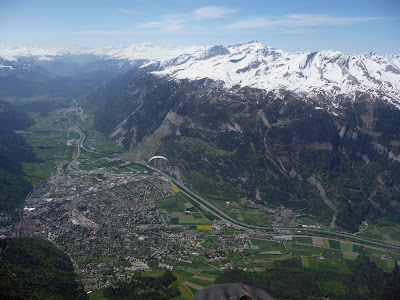 14:09 Michi Sigel crossing the Rhine valley. The city at the valley bottom is Chur. Out teamchef Martin lives there. From his office window he can see the paragliders above the Calanda, the mountain where I’m heading. 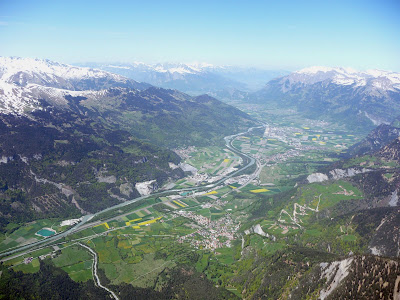 14:10 Rhine valley to the North. Just gorgeous, that view! 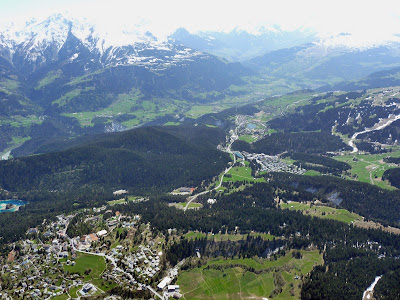 14:54 Flims, Laax, Falera. Flims will host this year’s Swiss Championships. I consider that part of my flight as a training for the SC. Quite some headwind. 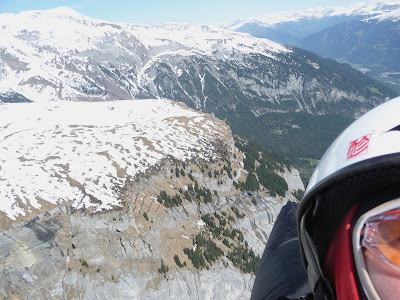 14:55 Flimser Stone. It looks like it should work, but normally it doesn’t. Flying close is forbidden anyway. 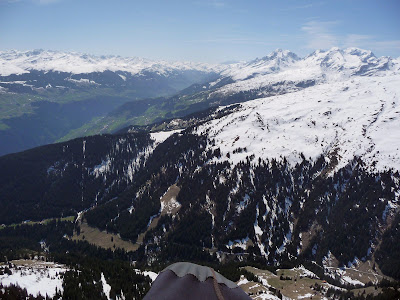 15:13 Surselva. The constant bubbling slowed down a little, flying got more comfortable now. I still followed the snow line. A herd of chamois could be seen 300 m below me playing in the sunlight.

Goal of the day was the crossing into the Glarnerland. The intended crossing was further west, and my progress slower than planned. The first crossing at the Panixerpass I could not take, because of military activity on the other side of the mountain. I had to improvise a short cut. It got really adventerous now! My first attempt to cross failed. I was too low, another 15 minutes lost. When I flew back to the valley thermals, Michi Sigel found a good one, which lifted him high enough. He crossed – I learned later – close to the Kistenpass. When I reached the assumed bottom of „his“ thermal – nothing. I had to go on a ridge further. There I found a good one, which I left at 3000 m. Not as high as the peaks to my left, but probably good enough. I still could not see the Glarner valley itself, but its entrance. 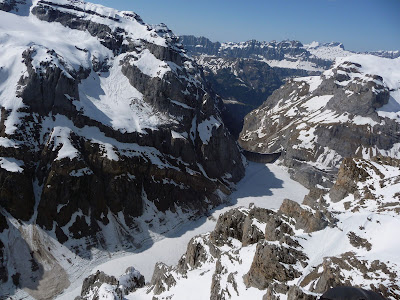 16:12 Limmerensee. That’s already on the Glarner side. 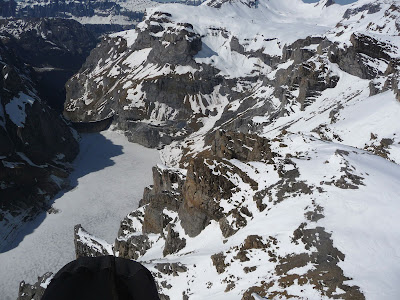 16:13 Limmeren valley. The valley is narrow and v-shaped, which is not so nice, but also very steep, which makes it better. The air was calm, so I wasn’t afraid to let the break handles go and take some pictures. Still, I flew very cautious. Definitely not a good place to land, or throw your reserve. 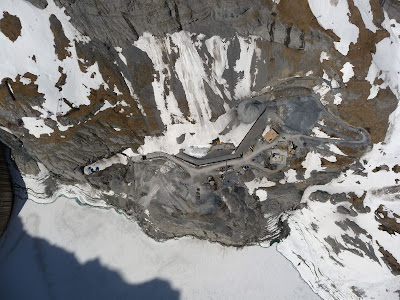 16:15 Construction site. Ain’t that beautiful from above? 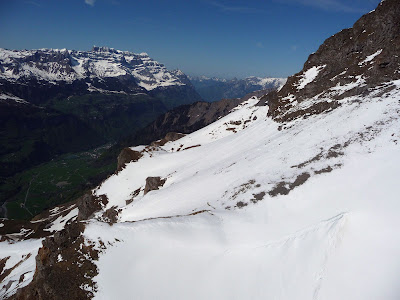 16:19 The Promised Glarnerland. There it is. Joy rushes through my body. I made it. 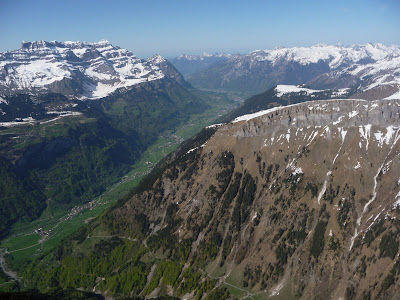 16:31 From there on I was very relaxed. The air in the Glarner valley was smooth, thermals nice and well organized, landing zones plentiful… The most adventerous part was over. I was just pleased to discover this new area. In a peaceful mood I thermalled together with a pair of eagles. Some time later I saw Michi Sigel again, about ten minutes in front of me. 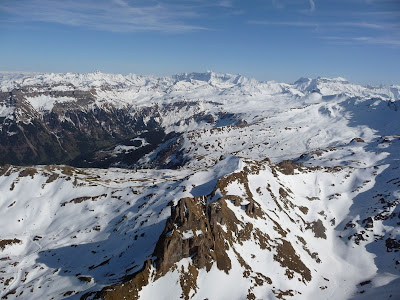 17:42 Sarganserland. To my right a breathtaking view over the skiresorts of „Flumser Berge“. 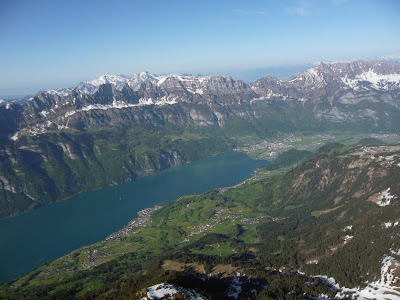 17:43 Churfirsten and Walensee. These beautiful mountains ahead I’ve flown before. But approaching them from the south is something new for me. The Churfirsten had some weak thermals left for Michi and me, but I didn’t try too hard. My bladder was full, so was my diaper. I was tired. 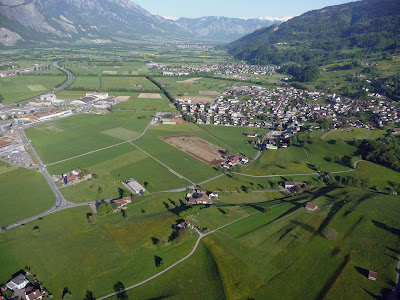 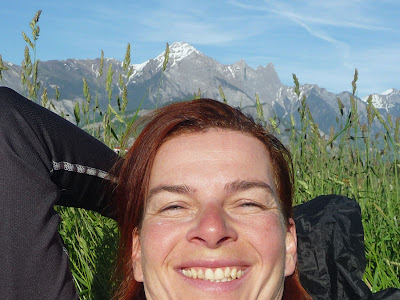 18:38 Happy and tired, I rested a few minutes in my harness and enjoyed the sun. The mountain in the back is the Falknis. – That was my personal best cross country flight so far. I’m longing to top it. 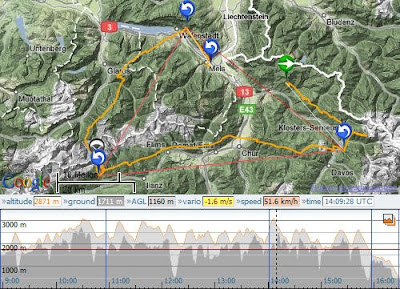 2 comments for “The Triangle”