On top of the overall ranking of a competition for the first time. It happended last weekend at the Swiss Cup in Frutigen. 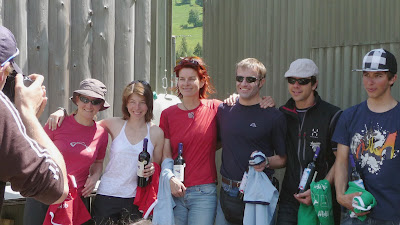 The task was set as an elapsed time race over 46 km. The flight was not exactly what I would call fun: 3 1/2 hour in weak, bumpy and quite often leeside thermals, mixed with a lot of valley wind. Never as high again as on takeoff. But luck was on my side.

Only nine out of 51 competitors made it further than the third turnpoint, five of them succeeded to climb again after a long low leg against the valley wind. David was the first of them. He climbs and glides really well (at least better than me), I’ve observed that before. At the last but one turnpoint he was more than five minutes ahead of me. While I was still trying to squeeze some altitude out of the last thermal, I patiently watched his line to the last turnpoint: direct, daring, … and not lucky. He was grounded.

Then it was my turn. I flew closer to the ridge, hoping to loose less height in the struggle against the valley wind. To my own surprise I managed to reach the last turnpoint. Wow! Gliding to goal then was the easiest part of the whole flight. Henri was the only other pilot in goal. It took him 35 minutes more to complete the course. Another brave one: Regula, a local pilot. She made it almost as far as David, and took 4th place overall. Well done, girl! Michi, my companion from the triangle flight, came in 5th.

With an 12 km/h average, that must have been the slowest races I’ve ever flown. The task on the following day was cancelled due to Föhn, which made me winner of the comp, see results.

Not only did (and still does) it feel great to win a competition, but the whole event was very pleasant. Meeting old and new friends added to the fun. Tom showed up, and flew his brandnew X-Alps glider for the first time. Martin once more took amazing pictures, and on the way home we ran into Eliane, whose 7th month belly fits her nicely (she’s still flying, if conditions are not too rough). – I’ve always enjoyed the Swiss Cups in Frutigen, thanks to Schmatz from cloud 7, who runs the comp smoothly and competent. A great pleasure. Hopefully next year again, maybe even with real thermals 😉