Already glider number nine in less than ten years! I can hardly believe it.

In 2001 I bought my first paragliding equipment. It lasted quite a while. But when I seriously got into cross-country and competition flying, the permanent change started: adapting and improving all parts constantly. The illustration below shows all models I have used or still use. 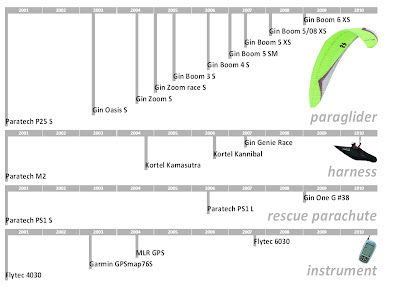 Faster every year
The Zoom and the Zoom Race used the same canopy, but different lines. I counted it as one glider. – 2005 my plan was to progress slowly, and get used to a comp glider in smooth autumn days within the next two years. Then, in summer 2005, there was the opportunity to buy a fairly new Boom 3 from Louise Crandal. During the Dutch Open in Piedrahita, after a task, you could see me soaring on this beautiful wing in the evenings. One week later, during the British Open, I could not resist the temptation. I flew my first competition on a competition glider. One week later, I attended an SIV on the Boom 3. Another few weeks later, I won my first podium in a World Cup. I never got back on the Zoom.

Heavier every year
The Kortel Kamasutra harness I still own, hoping to use it for coastal flying and kiting. – Since the early days my bag has gotten heavier and heavier: more electronic stuff, heavier harness, more ballast. Now my inflight weight is approximately 15 kg more than 2001. As a result, I had to buy a bigger rescue parachute in 2006. Why I had to get a new one in January, well, this story has already been told 😉

In a comp, you do not want to loose a task because of a problem with your instrument. Redundancy is the magic word. I started with the 4030 variometer, the MLR and the Garmin 76mapS. Now my flight deck hosts a combination of a Flytec 6030, the Garmin and – just in case – a solar vario.

← Once upon a time in Greece
Bye SIV, hello SLO →

2 comments for “The One-Glider-Per-Year Average”